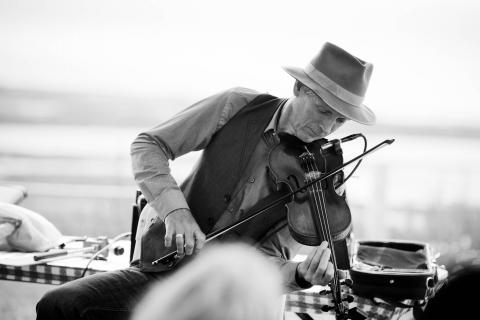 "Roy Johnstone has the heart of a poet, the spirit of an adventurer and plays like the Devil." Atlantic Gig Magazine

"One of the Island's most accomplished fiddlers " Doug Gallant, the Guardian

Roy hosts an acoustic session every Sunday afternoon at the Old Triangle Alehouse in Charlottetown. Fine food and great crac. see calendar. Roy was recently commissioned by cellist Julia MacLaine to compose a piece in the style of Bach's Prelude # 6 . This composition,  No 6 Post Bach , along with others was featured in a recent concert at “under the spire” on August 28 th, 2022. Julia’s recording was chosen as one of CBC’s top 20 recordings for 2021.

On his last tour Roy spent three weeks touring Bretagne , France where he was researching Bretagne music and dance. This trip combined with two trips each to Ireland, Scotland and Cuba have been part of his ongoing exploration of the music of the Celtic diaspora. He was one of the featured instuctors and perfomers at Fiddlehell and he hosts a regular Irish session every Sunday at the Old Triangle Alehouse in Charlottetown.

He has been active in the East Coast musical community for over 40 years. Guardian reviewer Doug Gallant has called him "one of the most accomplished fiddle players in Prince Edward Island" .He is an active recording artist and has 5 solo albums to his credit for which he has multiple nominations for ECMA awards. Roy's most recent CD is "Live at Loon", recorded live at the New Hampshire Highland games with Steve Sharratt. His latest studio recording "Longshore Drift" was nominated for two PEI Music Awards and he recently re-released in digital format his ECMA nominated recording Rolling Waves. He joined the cast in the popular production of Dear Johnny Deere as part of the Confederation center's summer season and he has perfromed in productions for Theater PEI and Theatre New Brunswick.

Roy has received accolades for both his music compositions and his studio production. His music has been featured in award winning NFB and independent film productions and he has been invited to perform with many of the region's most noted artists such as J.P. Cormier, Laura Smith, Lennie Gallant and jazz pianist Doug Riley. The Highland Council of Scotland commissioned Roy to write music to commemorate the 200th anniversary of Scottish settlers coming to Prince Edward Island. This music is featured in a new international recording entitled An-t Eilean, the Island. He recently was awarded a grant to create a new work which will be performed with the PEI symphony as part of their 2014-2015 season.

His musical career has taken him to Iceland, Scotland, Mexico, Cuba, and the United States. He was presented with a Government of PEI Official Musical Ambassador award and he is often requested to highlight many dignitary events such as the recent Governor General's visit to Charlottetown, two Royal Visits, a Canadian Trade Mission to Iceland, Maritime tourism promotion to New England, a Maritime Premiers Conference and an Ireland Trade Commission in Halifax, Nova Scotia.

As well as being an active recording artist he has co-produced and engineered for many Island artists. A recent co-production with the Queen's County Fiddlers was awarded best group of the year recording at the PEI Music Awards. He has been featured as an artist in several documentaries produced for television (Musical Gardens, a Soul Expression production done for Vision TV and CBC, and Steeplechase, a Vision TV production).

Roy host an acoustic Irish session every Sunday at the Old Triangle Alehouse in CHarlottetown. He has given many talks and has lectured locally and in Scotland and the USA. He also teaches privately and has given workshops on many aspects of fiddle playing. He has written a fiddle column in the PEI Fiddlers newsletter for several years.

He is well known for, and contributes his talent to aid many social justice and community causes. He actively works to create a vibrant and healthy musical community on PEI. He has served as a board member and VP for the Island Music Association. He was the music representative on the PEI Council of the arts for several years and the PEI representative on the board for the Canadian Conference of the Arts.